In November, I went to Scandinavia for Thanksgiving break with my mom and was fortunate enough to be able to visit some incredible people in the book world. This is the second in a series I am calling Book Nerd Abroad, where I recount my visits, share pictures, interviews, things I learned and interesting tidbits about the publishing industry around the world; the first posts will be from Nordic countries!

On our last day in Denmark, we left our Airbnb and hopped on the S-Train to Køge, a town about 40 km away from Copenhagen, to the South. The scenery outside the windows was lovely–I watched the world whip by with anticipation. This would be an interesting adventure–after I heard from Per and we messaged back and forth, he told me he would meet me at the train station and I could meet him. Per Jørgensen was someone whose name I’d seen here and there online on my hunt for Harry Potter translations over the past few years. He is a Danish artist; most notably, the illustrator of the original Danish Harry Potter covers, and also won the popular vote for best Harry Potter covers in a competition by Mugglenet. He also illustrated the 2016 Danish Christmas Stamps and does a lot of work for magazines.

When the train pulled into Køge station, Per greeted us and took us to his car where we met his wife, Ingrid.

I was bursting with excitement, and I had to ask him if he was still a Harry Potter fan. He admitted that he is still a Potterhead but hasn’t seen Fantastic Beasts yet.

His house was a hike from the station, and also as he casually mentioned, on the grounds of a castle. He offered to show us the castle, and how could we have said no? It was quite cold outside and the castle looked fantastic. The castle, Gjorslev Slot, is from the 15th century and now is split up into a few residences.

We continued on to Per’s house, where you could see both the Baltic Sea and the forest. His cute dog welcomed us at the door; an Alaskan Malamute, which was one of the cutest dogs I’ve ever seen. Per tended to the fire and showed us into his studio.

It was surreal to set foot into the studio; I thought about all of the Harry Potter artwork that was made here as I looked around at the paint splatters, posters and art supplies.

Per sat down at his computer and showed us what he was working on; a complex piece for a magazine about mythology. Here’s a video of him showing how he works in Photoshop with layers and different kinds of brushes.

After we learned about the studio, he showed us his bow and arrows; handmade, with serious draw weight. He strung it using his whole body and let me pull it back; my Camp Half-Blood days had prepared me, but my arm still shook because of the strength of the bow!

We sat down in the living room, where Ingrid had made us tea and brought out warm æbleskiver (puffy dough balls) with lingonberry jam. I had so many questions and wanted to hear his stories.

I filmed a lot of interesting parts of the conversation, which you can watch here.

I have typed up some of the stories he told and wanted to share some fun things I learned about his process and his Harry Potter art that I didn’t film.

Per has illustrated all seven Harry Potter books in Danish. For Order of the Phoenix, however, there are two different covers; one that was sold in bookshops, and the other a book club edition for book clubs around Denmark.

During a signing, Per was confronted by a young reader who asked him, “Why does Harry have 4 fingers?” Per was confused by the question, and then shocked, when he looked at the cover of book 1 and saw, indeed, that Harry only had 4 fingers on one hand. “I said ‘Oh my God!’ I have drawn Harry Potter with four fingers!” said Per with a smile on his face. Here’s the zoomed in cover:

Per showed photos of the original Danish Harry Potter’s inspiration; a kid in the neighborhood, who looks strikingly identical to the one on the cover, save for the glasses. Per likes to use models for his art, whether it be him, his family, friends or neighbors. He showed us pictures of him dressed up in costume in the forest that he had based a piece on. He takes pictures of people in costume and position and it makes it easier for him to accurately draw a realistic image with shadows, movement, etc.

He brought up the cover of Half-Blood Prince; his entire family is on the cover! The man in the back is Per, the woman with her arm on his leg is his wife, Ingrid, and the two girls in the water are Per’s two daughters.

Per recalled the publication of the last book–his first draft of the cover of Deathly Hallows was (SPOILERS AHEAD) an illustration of Harry Potter laying dead in Hagrid’s arms; a rather grim and dark take compared to the US and UK covers. When he realized that Gyldendal, the publisher of the Danish translations, would be hosting a party for Potterheads in their courtyard to celebrate the publication of the final volume  and wanted a big banner printed with the art on it, he thought that it would be a little off-putting if excited young kids showed up to be greeted by a dead Harry Potter.

For the final cover of Deathly Hallows, he chose a scene that he said confused some fans;  he wanted to clear that up. The last book’s cover is a scene from the Battle of Hogwarts, after McGonagall awakens the statues and they all go to war. The statues are the creatures on the cover, fighting alongside Harry, and Dobby, who evidently was not killed yet in this edition haha! I’m thinking that Per might have included Dobby so readers did not expect his death, but I could be wrong.

Per recommended a few books to us; the Pax series by Åsa Larsson and Ingela Korsell, a Swedish middle-grade which if I’m not mistaken, Ingrid had done some proofreading work on.

He showed us his Christmas seals and recounted his meet with royalty; he said it was surreal meeting Danish Crown Princess Mary in 2016, when he was commissioned by her Christmas Seal Foundation to create the artwork for the Christmas seals, a tradition in Denmark; letters and cards during the holidays are sent with normal postage alongside festive Christmas seals. The seals are beautiful! 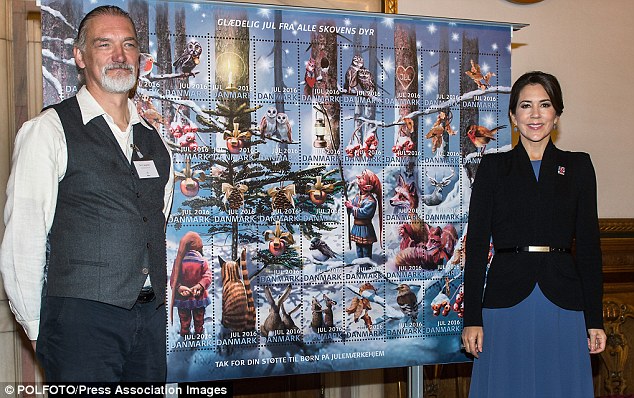 We talked for a few hours and then realized that our flight out of Copenhagen was leaving in a few hours, and we had to get our stuff and get to the airport. Before we left though, I found out that Per does woodworking in addition to art, and has a workshop. He also fixed up a boat that he and Ingrid set sail on in the summer, on which they vacation for weeks. Sounds like the dream.

We departed from the train station after having a wonderful talk in the car, about life in Denmark, universities, and our trip. Turns out we were all at Tivoli the day before around the same time but we missed each other!

Per and Ingrid were the sweetest people; so content and gracious, with unmatched hospitality. It was quite the end to our Denmark trip and once again made me so happy for the Harry Potter community; it’s meeting people like Per and connecting with others through HP that become the highlights of my years!

I will leave you with the view out of Per’s window, a beautiful landscape scene that stayed in my brain long after I left.

If you want to find out more about Per Jørgensen, or perhaps buy some of the beautiful Harry Potter books in Danish for yourself, visit per-o.dk and gyldendal.dk.