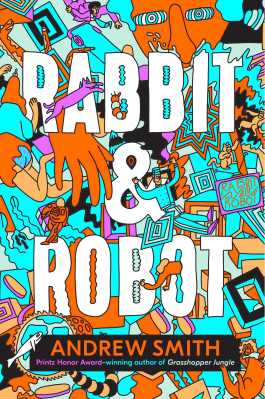 Rabbit and Robot by Andrew Smith

Cager Messer is a human living  in a cog world. The 28th World War has just started, and he is still the same spoiled rich brat addicted to Woz. His extremely wealthy father is the owner of Grosvenor Galactic Industries; part futuristic space cruise company, part media network. Cager has no real friends except Billy, and everything is done for him by Rowan, his assistant. Billy Hinman is a whole other story; he stays away from Woz, gets all the girls with his good looks, and his father just happens to be the richest man on the planet; the mastermind behind the cogs. Since cogs do every human chore and job now, humans can either be Bonks or Coders: go to war, or code the cogs and the rest of the world. The hit cog vs. human show Rabbit and Robot is the Tom-and-Jerry-like entertainment source for everyone hyped up on Woz, and the world is slowly falling apart. Billy and Rowan team up to get Cager to stop using Woz once and for all, and take him aboard the Tennessee; a Grosvenor Galactic Space Cruise Ship orbiting the moon that is as big as a small city, and does not have any Woz on it. In a few days it becomes evident that they might not be able to return home; two more wars started and the world may have possibly gone up in flames, and the insatiable cogs on board have started eating each other. Trapped on a ship with everything anyone could ever want, and in the company of Lourdes, the always happy, constantly farting cruise director; Parker, the always horny, personal-space-invading valet; Dr. Geneva, the talkative and annoying doctor, and many other characters, Cager and Billy must find a way to survive and stay sane, without Woz, and with only each other. Or is that another human they smell? An absolutely wild romp through space and learning about life, Andrew Smith brings his best and turns an insane idea and cast of characters into a well-spun and brilliant story full of life that could only come from his brain. This fantastic stand-alone keeps readers entertained and laughing from start to finish, while also making them slightly concerned about the future of their own world.

I had read Grasshopper Jungle and The Alex Crow before reading this, so I went into this story knowing it was going to be weird. And I still was not prepared for what I read. This book had me chomping at the bits (just like the cogs!) to flip pages; I was so invested in this story that I was really bummed to leave the characters when I finished it. Andrew Smith’s spontaneous and zany characters add so much flavor and dynamic to this story, it really is so much fun reading about them. This book was just fun. Everything about it, the idea, the setting, the emotions…it was hilarious and fun while not being perceived as too weird, or that the weirdness took away from the plot or writing. The voice in this book is spectacular; it switches from first to third person occasionally and the reader doesn’t even notice most of the time. While the book is sci-fi/futuristic (and I’m not saying that as a bad thing), it does ground itself in reality. When Cager and Billy are on Earth, you can almost clearly see an ironic take on today’s world and what the future could bring; coders and soldiers are two jobs that could very possibly be at large in the future, what with the advancements in technology and AI and the tension between countries. It’s so sadistically masterful in its description of the world; many things the characters say and do are extreme versions of topics present in today’s society. There is a group who thinks Canada is the worst, there are gun-wielding groups of people, and even the popular, titular show is a more barbarian version of Tom & Jerry for drug addicts. It feels like almost everything is a commentary on society and I really would like to know if Andrew Smith did it consciously (I’m sure he did). The characters were where this book took it to another level. Each cog character had a different emotion/expression that it used 90% of the time, for example, Lourdes, the absolutely insane and cynical happy-go-lucky cruise director who laughed and farted and danced her way through this book. The characters made it so enjoyable. Billy and Cager actually seem and act like teenagers; they aren’t middle-aged seeming teens with realistic solutions and scenarios that they survive purely based on sheer luck. They definitely accept their fate at points and are flawed, Smith doesn’t make them out as superheroes or unrealistic teens which was refreshing. And while Cager and Billy do talk about love and Cager laments his lack of relationships, the book is not centered around either of them finding love, there is no love story that distracts from the many, many problems of the cruise ship which I feel is something I don’t see often in books I read. It’s also funny; the absurdity made me just stop reading and laugh at parts. Overall, this book was an incredibly fun read and left me extremely satisfied. Not only did it fulfill my expectations of Andrew Smith’s wacky, imaginative storytelling, but it was a unique take on the future and the core human instincts, emotions and feelings and proves to be a fascinating introspective on the definition of humanity when all of it is stripped away in a world of robots. I definitely recommend this book and would suggest putting it on your TBR, it’s one I will be recommending a lot in the future.