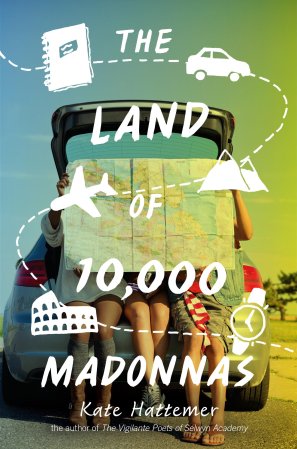 The Land of 10,000 Madonnas by Kate Hattemer

Jesse Serrano has a hole in his heart. He has a girlfriend, yeah. But the hole in Jesse’s heart is very much real and there and about to kill him.

Jesse Serrano is not alive anymore. He had a college fund, though. And cousins and a best friend and a girlfriend. He also had a mom who left him when he was little.

Over the summer, Jesse’s five closest peeps head to Europe to try and find Jesse’s mom. They know it’s not going to be easy, but they have one chance to live out Jesse’s final wish.

A novel about bonding, adventure and overcoming obstacles, Ben, Matt, Trevor, Lillian and Cal try to work as a team through conflict to find Jesse’s mother.

The Land of 10,000 Madonnas caught my eye because of the summary; it sounded so fun, travelling in Europe, adventure, travelling…I love travelling, okay? So I *knew* I wanted to read this one and I had high expectations for it. Sadly, this book fell a little short. The beginning was a little too slow for me, and I wish there had been more of the travelling off the bat. Things eventually sped up, though, and made me want to keep reading. For a book to have five characters, keeping them separate in the reader’s mind is crucial; and I feel like this book did a good job at developing the characters. There were a few times where the transitions confused me, but I read an ARC so that’s bound to happen. Every now and then there is a journal entry from Jesse’s journal which I thought was a smart touch; it gave a dead character a voice in a story about him. I felt at points this book tried too hard-something about the writing didn’t click with me and at points the vocabulary and metaphors seemed a little too extreme for the rest of the book. Some of the characters’ actions felt fake to me, and I couldn’t imagine them being real people in some of the situations. This book did a good job in describing the setting, and though I always want more description in books set in foreign countries (my wanderlust is that real lol), I had a vivid picture in my head of what was going on. Props to Kate Hattemer for her research; there is a lot of German and comparisons (as well as one GORGEOUS Harry Potter reference) that is not in every book you read, and if you’re German and you speak German, you’ll love the bits and pieces in the book.